As Chief Operating Officer, Raoul Thomassen (1974) is responsible for the Group’s operational activities.

Raoul Thomassen obtained a master’s degree in Business Economics at the University of Maastricht. He then started his career at Hollandsche Beton Group NV (HBG). From 2003 to 2005, he accumulated experience as a financial controller at the listed construction and project development company BAM Group. In 2005, he moved to the retail property sector. At Rodamco Europe, he initially worked as Business Controller Retail Management and, after the merger with Unibail, as Group Operating Manager. Raoul then worked for nine years as Head of Operations and Deputy COO, respectively, at Atrium European Real Estate, a listed developer, property manager and operator of retail properties in Central and Eastern Europe. At Atrium, he was responsible for the group’s operational processes and led local teams in seven countries. Before Raoul strengthened the Aedifica team as COO, he was Group Director Operations at Multi Corporation, a subsidiary of Blackstone, which manages retail properties in 14 countries.

Raoul Thomassen is a member of Aedifica’s executive committee.

Leo operates at the intersection of science and practice. He brings together the fragmented knowledge about real estate issues at Amsterdam School of Real Estate. Together with the ASRE employees and a large network of teachers and researchers, the ASRE gives a major boost to the professionalization of real estate sector.

He has been Chairman of the Management Committee (from July 1, 2016), director since May 21, 2003, for the period September 17, 2003 – September 30, 2009 Managing Director, Managing Director again since April 1, 2010. After graduating in Commercial Law and Financial Sciences, specializing in marketing, and postgraduate studies in Health Economics, Peter van Heukelom has continually enhanced his professional experience through courses in the field of finance/investments in social profit and the public sector.

Stephen Miles is an Executive Director in the CBRE EMEA Capital Markets Team and, since 2019, Head of Operational Real Estate Investment, Continental Europe

Stephen’s previous roles have also included leading the Investment Properties Team, working with the firms biggest clients across the region, Global Capital flows coming into the region, transacting cross border portfolios. equity raising for unlisted vehicles, and he has advised institutions on the creation of unlisted fund portfolios, structuring and capital raising.

Stephen has transacted in over €7 billion of real estate deals across EMEA representing clients in both the acquisition and disposal process.

Sébastien manages different healthcare portfolio’s within the group. He is also responsible for Business Development and development of Cofinimmo’s activities in new countries and segments.

He joined Cofinimmo in 2004 as Investor Relations Officer, became Development Manager Healthcare before joining the Executive Committee and becoming the group’s the Chief Operating Officer Healthcare. He has been a linchpin in the development of Cofinimmo’s healthcare real estate portfolio.

Stefan Voß specialises in real estate law with a focus on property transactions. He advises portfolio holders on an

Candice Blackwood is Co-Chair of the Life Sciences & Healthcare Sector and she is also a Partner in our Real Estate team. She specialises in large scale investment and development transactions acting for the private and public sectors. She has acted regularly on repeat investment from US REITS, international Private Equity investors and UK pension funds, on complex UK cross border real estate acquisitions, disposals, joint ventures, institutional investments, urban regeneration, mixed use developments, and large asset management projects.

Stefan Voß specialises in real estate law with a focus on property transactions. He advises portfolio holders on an ongoing basis on all aspects of real estate, landlord and tenant law. His clients also include national and international investors that are buying and selling (operator) properties in the health and care industries (nursing homes, ambient assisted living, serviced apartments, intensive care shared flats), often via sale and leaseback transactions. Alongside his legal practice, Stefan also lectures at Duale Hochschule Baden-Württemberg, an institute for further professional education, and has published numerous articles on real estate law.

Partner and Head of the Healthcare & Residential Advisory Teams

As Partner and Team Leader of the Healthcare Advisory Team, Jan-Bastian Knod is responsible for all portfolio transactions and alternative investments with a special focus on healthcare and care properties. Jan-Bastian also heads the Residential Investment Advisory division. His main activities include buyside and sellside advice on portfolio transactions, strategic business plan advice, developing sales strategies and portfolio marketing.

Jan-Bastian has advised on real estate transactions with a transaction volume of more than € 18 billion. Prior to his current position as a Partner at Cushman & Wakefield, he worked for CBRE in the Portfolio Investment Team. He gained further professional experience at Jones Lang LaSalle and in the location assessment department of REWE Finanz-eG.

Frédéric Durousseau has a long experience in asset management and real estate development. In 2001, he joined the Pierre & Vacances Group where he contributed to the Maeva integration, then to the Group’s growth in Spain, Italy as well as asset management development in France on institutional portfolio.

In 2010, he is appointed Head of Strategic Planning, in charge of operational coordination of development projects for Center Parcs / Sunparks with supervision of projects funding in Belgium, the Netherlands and Germany.

In 2014, he is appointed Chief Development Officer of Center Parcs Europe. He has worked recently on new sites of Bostalsee and Allgäu in Germany.

Frédéric Durousseau joined Korian on 10 October 2016 as Chief Real Estate and Development Officer for the Company. He is in charge of the real estate strategy for the Company and of its implementation, through strategic partnerships with investors and developers.

Frédéric is President and Managing Partner of Mozaïc AM and has over 15 years experience in the healthcare sector. On behalf of its clients/investors, Mozaïc has acquired and is managing over 250M€ of healthcare real estate in France, Germany, Italy and Spain.

Frédéric is the co-founder of Residial – Perial’s first regulated investment vehicle in France dedicated to nursing homes and nurseries, which was created as a joint venture between Mozaïc and Perial Asset Management.

Prior to this, Frédéric was the President of Senior Santé, an owner and operator of nursing homes in France. During his tenure, he was responsible for operations developing the group’s operating model and processes. During that period it funded, developed, built, delivered and sold 11 nursing homes (circa 50,000 m2). Prior to Senior Santé/B-Patrimoine, Frédéric held various positions within HSBC (London) and Lazard (New York and London).

Co-founder and chair of the Senior Housing and Healthcare Association.

Marcus has been at Savills since 2007, specialising in student accommodation. Since 2016 he has focused on continental Europe, covering the student, multifamily, senior living and healthcare sectors.

Marcus has been heavily involved in establishing Savills market leading position in the European student accommodation, multifamily, senior living and healthcare markets. Initially forming a strong grounding in research and valuations for developers and funds, this has since led to a wide array of major development, investment and funding transactions in 12 countries across the continent. Marcus and his team have transacted more than 30,000 operational residential beds in the last three years, equating to several billion euros of investment.

Nikolai Schmidt has been working as an investment manager at Swiss Life Asset Managers and its then subsidiary CORPUS SIREO in the “Health Care” area since the beginning of 2015 – at the beginning in Luxembourg, since 2017 in Hamburg. In 2018, he took over as head of the “Healthcare Investment” team. Schmidt has many years of experience in the area of operator-run real estate, especially in the care sector, as he was previously active as a project developer for a wide variety of asset classes and also focused on the health care segment here.

Geert Wellens had a +20 year career as a publisher and director in the Belgian financial and real estate press, when he co-founded the asset management company Econopolis early 2009 (of which he served as CEO for almost 10 years).

Late 2018, he launched the real estate fund Triginta, specialising in the redevelopment of religious real estate, the healthcare infrastructure of the future and partnerships with local governments.

He is the author of a number of books on investing and real estate, and a member of the board of a Belgian hospital, a hospital network and two senior health care groups. 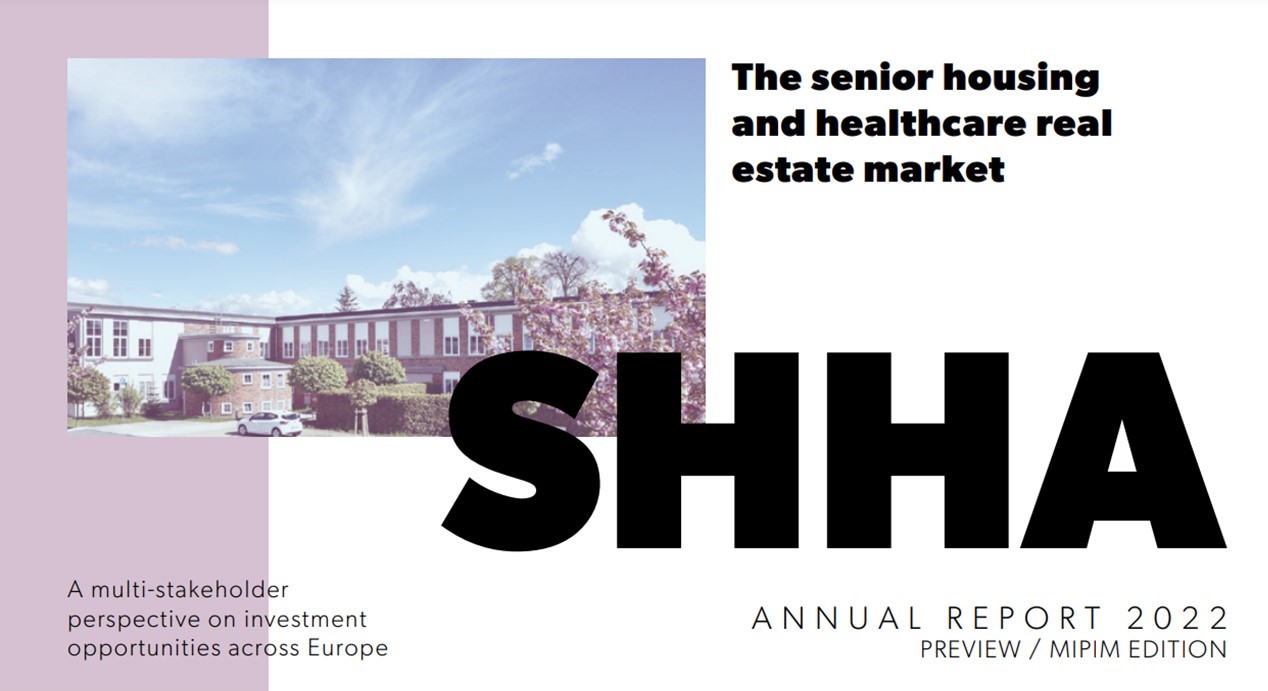 Download the SHHA annual report – MIPIM preview to see what lies ahead of the senior housing and healthcare sector in Europe.